Workers from France, Italy, and Spain account for more than a third of total staff at the European Medicines Agency, plus around 68% of agency staff members are women, according to new statistics.

Workers from France, Italy, and Spain account for more than a third of total staff at the European Medicines Agency (EMA), plus around 68% of agency staff members are women, according to new statistics published on April 16 in its 2012 annual report.

The total budget of the EMA in 2012 was €222.5 million, representing a 12% increase against 2011. The European Union's general contribution was 10% of the total budget, and operational expenditure made up over half of the total expenditure. This includes a total of €82.19 million paid to member states for the evaluation of medicines.

"There has been an overall increase in GMP inspections over the years; however, the high figures for 2011 were due to unplanned inspections related to non-compliance and unforeseen API (active pharmaceutical ingredient) inspections in third countries," noted the report's authors. "The number of quality defects reported following inspections has been very high for the past two years."

The report highlights the main recent trends in the agency's activities. For the past few years, EMA has received a stable number of initial marketing authorization applications (MAAs) for human medicines, with a total of 96 applications received in 2012. The Committee for Medicinal Products for Human Use issued 59 positive opinions for the approval of new medicines, including a positive opinion for the first gene therapy in Europe.

According to an accompanying EMA statement, "In general, the agency has observed an increasing complexity of the applications for new medicines received. A 36% increase in the number of MAAs for medicines with orphan designation was seen in 2012 compared with 2011, with 19 applications received in 2012. This is a very welcome trend as it increases the availability of medicines for rare diseases and demonstrates the importance of the orphan-medicines policy."

The success of the orphan incentives is underlined by the steady increase in the number of orphan designations, continues the statement. A total of 107 designations were granted in 2011, 148 in 2012, and more than 150 are expected in 2013; 72% of the medicines that received a positive opinion for orphan designation concerned medical conditions affecting children.

During last year, the number of companies assigned micro, small, and medium-size enterprise (SME) status by EMA increased by 58% compared to 2011, with a cumulative total of 1,098 active SMEs registered at year end. Additionally, a rise in the number of applications by SMEs was observed in 2012; almost 30% of initial evaluation applications were submitted by SMEs. The increase is particularly significant for applications for medicines with orphan designation, as 68% of these applications were submitted by SMEs, compared to just 27% in 2011, according to EMA.

There was a significant increase in the number of SMEs seeking scientific advice prior to filing an MAA in 2012: 64% compared to 41% in previous years. In 2012, for the first time, an SME requested biomarker qualification, another tool that supports the development of medicines that the agency provides to companies, large and small, the statement concluded.

"It was also a year of change in terms of handling conflicts of interests, in order to tighten the policies in place, and in terms of openness and transparency—two major priorities of the agency," wrote Prof. Guido Rasi, EMA's Executive Director, in his introduction to the report.

Rasi singled out the European medicines network as one of the EMA's successes. The network is a partnership between the EMA, the European Commission, and more than 40 medicines regulatory authorities in the EU and the European Economic Area. It aims to make available the members of the scientific committees and gives the agency access to a pool of experts, allowing it to source the best-available scientific expertise for the regulation of medicines in the EU. 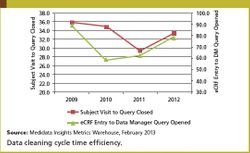