The Central Laboratory: 20 Years of Evolution

A detailed history of the billion-dollar industry since its inception in 1986 and what the future may hold.

Today, the concept of centralized laboratory services is well accepted, but that was not always the case. Two decades ago, the central laboratory industry was born out of a need for a more accurate way to collect and report clinical trials data. Since that time, the industry has grown into a billion-dollar market that is now a critical component in more than 70% of all clinical trials worldwide.

This year marks the 20th anniversary of the central laboratory industry. Central laboratories analyze blood, tissue, urine, and other specimens through biochemical assays, providing nearly 90% of all data that comprise a new drug application. As biopharmaceutical companies are under continued pressure to provide enhanced therapies that help improve and lengthen human life, reduce drug development costs, and speed drug development cycle times, the central laboratory industry is becoming more important than ever.

As the biopharmaceutical industry has been maturing in many established markets, the demand for improved drug therapies in emerging markets has been exploding, increasing the opportunity for the industry to reach treatment naive patients and provide an opportunity for continued market growth. The areas that have seen the largest growth in emerging markets include Eastern Europe, Latin America, India, and Asia Pacific.

Conducting clinical trials represents an average of 37% of the total cost to bring a new medicine to market, and laboratory testing represents a critical step in supporting the evaluation of a new product. The benefits of having centralized information and the value of consistent data reporting that is associated with a central laboratory is increasingly gaining favor with the regulatory community and drug sponsors due to the significant cost and importance of this data to a regulatory submission.

Taking a look back at the 20-year history of this industry, it is interesting to see how an idea evolved into a billion-dollar market in just 20 years, and what the future holds for the central laboratory services industry.

The birth of an industry

Historically, when clinical trials first began, the laboratory results obtained were used primarily to evaluate safety rather than efficacy. Gauging a drug's ability to treat diseases and symptoms was more observational than biochemical, so sponsors could use local laboratories for testing. As biochemical efficacy data began to be used by the industry for major statistical endpoints, higher capacity, faster, and more homogenous lab facilities were needed.

In the 1980s, when a clinical trial commenced and laboratory test data was returned, pharmaceutical companies would typically receive data with a 39% error rate. Human error accounted for the majority of data inaccuracies, which were caused by such things as mislabeled test kits, incorrect tests, and missing specimens.

Prior to the advent of the first central laboratory in 1986, testing for clinical trials was managed by clinical trial sponsors through the use of many local or regional laboratories—including hospitals, clinical laboratories, and university research departments—which often increased the possibility for data errors, lengthened study timelines, and increased study costs.

SciCor employees gather around the first specimen collection kit circa 1986.

During this time, the analysis of clinical trials data often required months of work, with the data having to be "cleaned" first before it could be analyzed. Burdened by the difficulties associated with gathering data from multiple local laboratories that used different testing methodologies, reference ranges, and standard operation procedures, the idea for a central laboratory was conceived.

The four founders of what eventually became the world's first central laboratory were committed to devising a method that would provide globally combinable, high-quality laboratory data to study sponsors to speed up clinical trials and reduce the time spent on data cleaning. The goal was to establish a business that could collect specimens from investigator sites and deliver them to a central laboratory within 48 hours, while providing study sponsors with a less than 2% error rate.

The world's first central laboratory, located in Indianapolis, Indiana, was founded in 1986 under the name SciCor, which later became Covance Central Laboratory Services. At that time, SciCor was the only company that provided data within 48 hours using the same clinical trial methodology with less than a 2% error rate. Twenty years later, the business plan built around SciCor has been the genesis of an entire central laboratory services industry.

By April 1986, the first study was underway. This study processed clinical trial laboratory specimens from across North America with a staff of only nine individuals, who were committed to providing test results within 48 hours. Reaching this goal, however, did not come without its challenges.

In order to deliver to study sponsors faster access to higher quality combinable data, it was necessary for the first central laboratory to achieve faster receipt, analysis, and a significantly reduced rate of error. Through the establishment of relationships with global logistics couriers, standardization in the production of study kits, and the development of a single global database, the central laboratory industry has been able to deliver combinable data to clinical trial sponsors.

The notion of "combinability" was essential if biological data was to be received from different laboratories but stored and transferred into a single global database. For combinable data, the key was using the same testing methods, reference intervals for each assay, and standard operating procedures across each central laboratory location.

In order to deliver combinable data, a central laboratory must use the same methodology principles, calibrators, and reagents. To provide combinable data to study sponsors, the central laboratory also has to provide a way to consistently collect biological specimens. SciCor was a pioneer in the design and development of the first protocol visit specific laboratory specimen collection kit. The specimen collection kit was originally developed to reduce the error rate at investigator sites that resulted from not having the appropriate tests or test materials at the time of a patient visit.

These specially prepackaged specimen collection kits allowed sites to collect and ship samples to the central laboratory in a homogenous way and provided for improved tracking of specimens within kits, as each kit and its components were barcoded for improved traceability. Missing tests could be identified faster and easier, enabling earlier identification of missing data points and providing the ability to remedy these errors prior to final data analysis.

The role of transportation

SciCor was the first central laboratory to establish dedicated relationships with logistics couriers in order to deliver faster specimen shipment timelines. In addition, they developed special packaging for specimens to enhance specimen visibility and identification during shipment. Today, clinical trial sponsors expect a central laboratory to provide efficient, high-quality specimen shipping, receiving, and tracking services, and they evaluate service providers based on their logistics consulting and contingency planning capabilities.

Many central laboratories outsource their courier services to commercial worldwide shipping organizations that specialize in clinical trial specimen logistics, developing numerous strategic partnerships with global couriers. Logistics entails detailed coordination with study sponsors, investigator sites, couriers, regulatory bodies, and their own scientific and technical personnel to get samples from study subject to laboratory and submitted in time for sponsor review.

How a central laboratory handles its transportation system can have a dramatic effect on how well they support sponsors needs. For example, on 9/11 air space was closed down in the United States. Due to the fact that a contingency plan was in place, Covance was able to use ground couriers in North America to deliver specimens to its central laboratory, rerouting specimens from Latin America to its central laboratory in Geneva, Switzerland. In total, the company was able to contact more than 22,000 investigators—every single client contact in less than three hours.

The 1990s brought an increase in pharmacological study complexity, globalization of clinical trials, and a greater urgency by biopharmaceutical companies to bring their drugs to market faster. By spring 2006, the only pharmaceutical company to maintain an internal central laboratory facility decided to close its operation and outsource—making the central laboratory industry a 100% outsourced market.

Biomarkers. Due to an increasing trend in the focus of drug research and development on more complex conditions, safety concerns, requirements for approved drugs, and increasing pressures on launched drugs, the biopharmaceutical industry is searching for ways to more quickly identify products with greater possibility for market. The use of biomarkers to support candidate selection and evaluation in clinical development is a growing trend for the central laboratory business.

As the growth in complex testing areas increased, such as oncology and critical care, the need for improved methods of collecting higher quality local laboratory data expanded. In some clinical trial situations, a local or regional laboratory solution may be preferred, but this raises questions as to the quality and consistency of the results. In 1995, Dr. Jaap Dijkman and Dr R.T.P. Janssen developed a unique solution: the Virtual Central Laboratory.

The Virtual Central Laboratory® , now a division of Covance Central Laboratories, was designed for clinical trial studies that require fast turnaround time, such as acute care and oncology studies or studies in regions where transport logistics or other reasons preclude the use of a traditional central lab. Using a unique calibration processes and technology and a network of local laboratories, the Virtual Central Laboratory® improves data collection and access to laboratory test results from a single global database and has supported product submission approvals in the United States and Europe.

The central laboratory services market began with a focus on centralizing the global collection of laboratory data, but the increasing complexity of clinical trial laboratory data is pushing the industry in new directions.

As we move into the future, the geographic expansion of clinical trials, development of emerging markets, technological advancements in biomarker testing and improvements in ancillary laboratory services will impact how fast and in what direction the industry will grow. It will be interesting to see exactly what the next 20 years will hold. 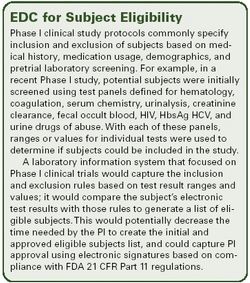 The Need for Electronic Data Capture in Phase I 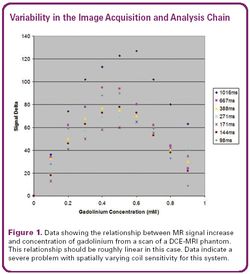