GCP's Future: Looking Ahead to the Next 20 Years

Clinical research is becoming increasingly complicated and fraught with risks. In this climate, the European Forum for Good Clinical Practice (EFGCP) has a vital role to play in bringing together all stakeholders to work out how to discharge their responsibilities in the framework of the clinical trial protocol for the protection of each consenting participant, according to two senior EFGCP officials.

Identifying problems and finding solutions by ensuring collaboration between all stakeholder groups in working parties remains essential to the group's working model, particularly in the important fields of ethics, education, audits, and pediatric and geriatric trials, noted Jean-Pierre Tassignon, MD, former Chairman of the EFGCP, and Board Member Olga Kubar.

EFGCP celebrates its 20th anniversary this year, and remains a not-for-profit think tank open to anybody who wishes to debate in a multidisciplinary mode real-life issues at the interface between science and ethics concerning the practice of clinical research, they wrote in the Summer issue of EFGCP News.

"By and large, it (clinical research) is practiced for the advancement of medicine and in the public interest," they stated. "It is within the EFGCP structure that multi-stakeholder consensus ripens and is pragmatically formulated. It is vital to continue to reach out to partner organizations outside the EFGCP and to open up the discussion to as many stakeholders as possible. A successful example is the ongoing collaboration with DIA [Drug Information Association] in organizing the Annual Pediatric Conference."

Tassignon and Kubar also looked back at the early days of the forum. Representatives from 25 organizations involved in clinical research in Europe met at a hotel at Brussels airport in November 1991. This group included sponsors, CROs, IT companies, the European Ethics Review Committee (EERC), the UK Medical Research Council, and the Wellcome Foundation. A foundation working group was set up under the chairmanship of Alfred Pauls, Head of Information Systems at Schering AG. He is now senior consultant at the Berlin Center for Epidemiology and Health Research (ZEG Berlin).

The EFGCP held its constitutional assembly in May 1993, hosted by the European Organization for Research and Treatment of Cancer. Two key people were Josef Hoet, Vice Chairman of the EERC, the first multinational ethics committee in Europe, and Tassignon, Executive Vice President of the largest clinical CRO in Europe at the time: G.H. Besselaar Associates, Inc., Princeton, New Jersey, now part of Covance, Inc. Both men were based in Brussels, and they started brainstorming about the need for a neutral place where professionals involved in clinical trials, including those from the regulatory authorities and patient associations, could meet and debate how to translate moral, scientific, and technical responsibilities into daily practice in different countries.

The first annual conference took place later in 1993, and the EFGCP has now organized over 150 open, multidisciplinary meetings in Europe and beyond. It has published many position papers, and the ethics, education, and audit working parties, which were created in 1993, remain active. The elaboration of a systematic approach to training of ethics committee members by the ethics working party has been ongoing since 2007. More recently, the EFGCP-EGAN (European Genetics Alliance Network) co-led Patients' Roadmap to Treatment Working Party reflects the absolute necessity of including patient representatives in a very close partnership with clinical research professionals, according to Tassignon and Kubar.

Tassignon, who is President of Crossover Clinical Research Infrastructures AG, was succeeded as chairman in 2010 by Ingrid Klingmann, MD, President of Pharmaplex bvba. Attention is now focusing on the EFGCP's next annual conference, "Benefits and Risks of Research: How Do We Redress the Current Imbalance?"—to be held on January 28-29 in Brussels.

"Without evidence, risks are exaggerated and the benefits played down. Medical and drug development is undermined, researchers are cautious, monitors are without clear and appropriate objectives, and as importantly potential research participants ill- or un-informed. We all lose," noted the organizers. "There is therefore an urgent need for an accurate assessment of this balance and a coordinated approach to resolve these problems."

The event will explore the consequences of research, and look at how to achieve a fair balance that promotes improvements in healthcare and new medicines without diminishing protection of the research participant. It will also address the current proposal for an EU clinical trial regulation and its consequences. 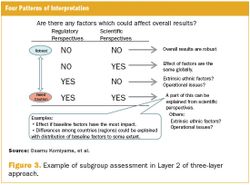