Under the Hood: EDC

New alternatives for e-clinical and data management. As EDC becomes more widely used in clinical trials, sponsors are not limited to one option but rather can choose different routes to optimize EDC efficiency.

When I was growing up in Michigan, there was a mechanic shop that advertised, "All Foreign Cars Serviced Here." At the time, the shop was unique and the mechanic's business thrived, with odd Volkswagens, Toyotas, Mercedes, and Volvos constantly parked outside. As a kid, I was amazed at the mechanic's ability to cope with such a wide and—to my eyes—bewildering array of machines. An older and wiser friend assured me, "If you know one car, you know them all. After all, each one has an engine, wheels, and brakes—right?"

A few years later, the garage closed, and I learned why. Many of the mechanic's patrons had waited months for parts. Others were told to go elsewhere when advanced technologies went bad. It was the typical story of increased sophistication forcing out the generalist in favor of the specialist—a concept that also applies to Electronic Data Capture (EDC) in the context of today's clinical trials.

It's all about data

No matter how promising a drug, the way data are collected and managed can make or break a clinical trial. With increased pressure on pharmaceutical firms and as trials become increasingly complex, companies need to take a hard look at who is handling their data—and how. Gone are the days when companies could consider data collection and management a commodity add-on from an outsourcing vendor. Increasingly, they are using EDC.

A March 2007 study conducted by Phoenix Data Systems distributed to more than 6000 pharmaceutical, biotech, and biopharmaceutical/biological industry professionals found that 83% of clinical trial sponsors reported using EDC as part of their research efforts. Of those companies, 25% said EDC use in all of their clinical studies has increased by more than 50% over the past two years. Companies like EDC because it is more accurate and gives them faster access to study data.

Many companies, however, still view EDC as a technology they need to master to succeed. In reality, they have three options: Do-it-yourself EDC, traditional full outsourcing or functional outsourcing.

With the first approach, companies build their own proprietary infrastructure around packaged EDC technologies provided by outside vendors. They can customize the system by integrating it with existing systems, ensure total internal control of all aspects of study processes, and take on new staff devoted to learning the technology. Eventually, they can achieve productivity levels that come reasonably close to getting full value from these tools. Yet it is akin to buying a car dealership and specializing in one car.

Many organizations do not have the inclination or resources to develop an infrastructure to manage and master e-clinical technologies. The cost and time associated with training and implementation is more than they can absorb—especially since the software needs to be customized to each trial. These sponsors may consider traditional full outsourcing of the trial, option #2.

Some outsourcing companies position themselves as the "expert foreign car mechanic" who can manage every aspect of a trial, including EDC. Yet the many aspects of a trial are like 15 different systems of a car. While the company may be great with the brakes, they may not be strong with electrical systems. That leads to the third option, functional outsourcing.

With this strategy, a sponsor can outsource as little as one function or aspect of a trial, such as data management, while conducting internally the aspects with which they have the most expertise. To use the car analogy, it's admitting that you can handle repairing the brakes but not the transmission.

The world of clinical trials is a lot like the growing number of sophisticated features found in foreign cars: No company can advertise as a foreign car specialist anymore. With EDC, the question sponsors should ask at the outset is, "How do we get to maximum operational volume and realize the benefits of EDC as quickly as possible?" Once you determine that, you can choose your best route to maximal operational efficiency. 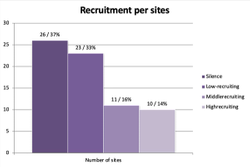