Though they are the largest minority in the country, Hispanics remain underrepresented.

According to the US Census Bureau, Hispanics constitute the nation's largest ethnic or race minority. In contrast, Hispanics make up only 1 percent of clinical trial participants. Ella Grach, MD, Executive Medical Director at Wake Research Associates, explains that part of the reason the Hispanic population is underrepresented in trials is a lack of education about clinical research.

Minority representation is of dire concern to researchers because various ethnic groups have different reactions to pharmaceuticals. Therefore a diverse trial population allows researchers to study potential side effects in a more realistic way. Without minority participation in clinical trials, whole populations are left vulnerable to unforeseen side effects.

"The leading causes of death in the Hispanic population is cardiovascular diseases and cancer," Grach said. "There are so many trials right now that this population would benefit from, and pharmaceutical companies would benefit by having that ethnic variety enrolled in clinical trials. I think that we need to fill that gap."

While some may believe that reaching out to a different community might be as simple as handing out brochures translated in another language, cultural barriers often stand in the way.

"I do not work with businesses who seek only to have their materials translated into Spanish," said Borthayre. "Motivations and concerns regarding clinical trials are very different for the Hispanic immigrant and those issues are simply not addressed by most clinical sites."

Borthayre's course is mandatory for recruiters and clinical research coordinators at Wake Research Associates. The course, based off of information from focus groups and surveys, is taught either in person or through webinars. Before Borthayre teaches the course, she does an initial interview to find out what the company does and what topics students want to cover. Borthayre then prepares her webinar based on this interview.

A retention exam is given at the end of the course, and a certificate is issued based on the results. In addition, Borthayre is also available to come on site where the company can ask questions and seek her opinion on ideas and advertisements.

The course, which focuses on the needs of the foreign born Hispanic, is particularly useful for those living in an area where the Hispanic population is fairly new.

"Our situation is unique," Grach said. "I have a good friend in Miami where there are a lot of (Hispanic) populations there. (The population is) people who have lived there and also newcomers, so it's a good mix. The course is probably not important for researchers in Miami."

This course is especially relevant to Wake Research, located in Raleigh, North Carolina, where 75 to 80 percent of the Hispanic populations are "newcomers," according to Grach.

"(Borthayre) said (segment 1) is the most vulnerable population you need to learn how to deal with. I learned a lot of useful information and I insisted that I wanted to take that course myself," Grach said.

Although the staff at Wake Research took the course only a month and a half ago, they have started to see positive results.

"We've already seen changes. We've learned some minor things. We never knew Hispanics are the number one population in the United States using cell phones, so that was good...to know how to communicate with them," Grach said.

Grach plans on continuing to use Borthaye's services in the future, as she seems to view learning about Hispanic culture as an ongoing process, rather than an isolated, one-time event. "I'm planning on staying in touch with her and continuing to use her services because I don't think we are there yet," Grach said.

To learn more about the course visit www.hispanicmarketingresources.com. 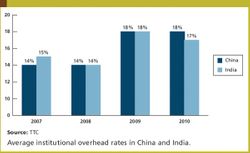