In January, Merck BioVentures, a division of Merck that delivers biosimilars, entered into an alliance with Parexel to provide clinical development services. In news reports, it was noted that Merck hopes to have five biosimilars in late stage trials in 2012, with hopes to launch products in 2015.

In an interview with Applied Clinical Trials after this announcement, Parexel CEO Josef Von Rickenbach said that the company's regulatory expertise, as well as its biosimilars domain knowledge, influenced Merck to choose Parexel for this alliance. "Merck obviously has a close collaboration with us and is entrusting us to the development of their portfolio in biosimilars. And that's a big deal, any way you look at it, for both companies."

To achieve the milestones that Merck requires, Parexel created a dedicated Merck BioVentures business unit within Parexel. Said Rickenbach, "It's at the current time relatively small because we're still in the planning stages and in the regulatory clarification stages."

Regulatory clarification would translate to mean that FDA does not have a formal guidance on biosimilars in place, so most pharmaceutical companies' decisions in this area rely on looking at the EU's biosimilar path as it is much more advanced. To date, Europe has approved 14 biosimilars with no significant safety issues reported (save for one that was a follow-on biologic called Eprex, an epoetin alfa to treat anemia, which suffered from a significant safety issue in France). The biosimilar developments that have been reviewed in Europe include three classes—human growth hormones, epoetins, and recombinant insulins. With a growth hormone already approved in the United States, as well as the July 2010 FDA approval of a low-weight molecular heparin (enoxaparin), there are pathways to negotiate toward approval.

Rickenbach said, "The biosimilar area in many respects is an emerging area. I think where everybody agrees, all the experts in government, in industry, in our camp, is that it's an important, new emerging area in the pharmaceutical and the biopharmaceutical area, and I can also say that our company has been a part of this emerging field since inception. The European countries have been a little more aggressive in getting biosimilars on their markets and we have been a part of that all along. So we have a lot of knowledge and expertise from a regulatory point of view. Also from a clinical trials point of view."

The FDA offered a bit of light on its thinking in a Perspective piece in the New England Journal of Medicine, August 4, authored by Steven Kozlowski, MD, Janet Woodcock, MD, Karen Midthun, MD, and Rachel Behrman Sherman, MD. In a Ropes & Gray attorney newsletter alert, available at this link, http://bit.ly/p3UFtG, its FDA Regulatory Practice offered the following list of its interpretation of FDAs thinking based on the NEJM article:

A formal guidance from FDA is expected this year. 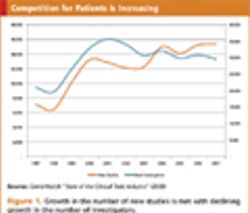