The rocky economy continues to wreak havoc on employment and drug development.

Statistics and headlines don't portray a pretty picture ofthe economies in Europe or in the United States. Adding in the next layerspecific to the clinical research and trials industry, and the picture inthe past two years continues to be complex and changing. It is not just oneforce—the economy—at play. Other aspects include spikingregulatory requirements; increasing global complexities; and the diminishingblockbuster drug model.

But the economy is certainly applying more than its fair shareof pressure onto the conduct of drug development. The other dimensions arethe technologies, outsourcing strategies, and mergers and acquisitions thathave resulted from the downward forces.

For the time period January 2011 to July 2011, thepharmaceutical industry shed 18,264 jobs and for the same period this year8,968. And while the reasons for job cuts were not cited by individualindustries in the early August Challenger, Gray & Christmas jobs report,the top five reasons for job-cutting across industries are: restructuring,closing, cost-cutting, economic conditions, and loss of contract.

However, while job cuts may be leveling off in thepharmaceutical industry, planned hiring is not in the cards. In the jobsreport, for industries planning to hire, pharmaceuticals were in the bottomthree. In fact, in another report, earlier this year, smaller to mid-sizebiotech companies were the ones more likely to predict growth versusone-third of larger companies. In an Aon Hewitt report, less than 5% of thesmall- to mid-sized biopharma companies expected their staffing to decrease,compared to 15% of the larger sponsors.

With all of the downsizings, and seemingly less or non-growingstaff to handle the workload, the larger pharmaceutical companies are taskedwith merging internal capacities, weeding out redundant departments andpositions, and figuring out what to do with the capabilities in which theywill no longer invest. Among these companies, outsourcing is the key togetting work done.

In a January 2012 Annual Global CEO Survey fromPriceWaterhouseCoopers, it found that 43% of biopharma CEOs had outsourced abusiness process function in 2011. This compares with all other industries,where CEOs reported 35% to the outsourced business function question.

All of this outsourcing activity translates into additionaldownstream trends. The first is the ability of both the sponsor and itsoutsourced partner to effectively manage the outsourced relationships. Andsecond, is that it could mean a boon of sorts to contract researchorganizations.

Both trends come to light in separate surveys. The first weconducted in August, where we asked: "Has your need to provideoversight of these sourcing relationships changed over the last twoyears?" The responses were weighted toward a definite increase at 62%.

And the second trend, what it means to CROs, the Salary andCareer Development Survey conducted in September and October by CenterWatchand Applied Clinical Trials found that respondents workingfor CROs were significantly more likely to see a positive change in theeconomy compared to sponsors or investigative site respondents.

In his September 2012 column, Ken Getz offered a more targetedanalysis of the CRO market size in the United States. From Tufts CSDD data,it surmised a total of 21,000 US jobs in the clinical research segment; 643total companies, and the total share of US personnel comprises 13%worldwide. Its analysis, which includes regulatory services, has theclinical research market valued at $6.5 to $8 billion. Approximately 17% ofthe companies providing these services are publicly traded.

In other reports, the forecasts are for growth in global CROmarket size and penetration. Business Insights forecasts the market to be$35 billion next year, and Frost & Sullivan anticipates Compound AnnualGrowth Rate of 10.5% through 2017. William Blair & Co. expects thecurrent outsourcing penetration rate to increase by a few percentage pointsover the next year or two, and CRO management commentary suggests that overthe next five to seven years the outsourcing penetration percentage couldincrease to more than 60%. Its model currently anticipates a 10% increase inpenetration from 2010 through 2015. What this all means is that pharma isrelying on CROs and service providers more than ever in its clinicalresearch.

Applied Clinical Trials has conducted the Salary andCareer Development Surveys on a biannual basis since 2006. For our surveysin 2010 and 2012, we partnered with CenterWatch to develop the questionnaireand analysis of the data. Their own report from this shared data will bepublished in their January/February 2013 issue.

The 2012 Salary and Career Development Survey was conductedduring the months of September and October 2012. The survey was conductedonline and was e-mailed to a broad range of clinical research professionalsworldwide (Figure 1). A total of 1,068 professionals responded to thesurvey. Close to three quarters of responses originated from the UnitedStates and the majority of the sample was employed full-time. A third of thesurvey respondents possessed a bachelor's degree as their highest levelof education completed and over half of the sample had some type of advanceddegree, indicating a highly educated group overall. Survey respondentsaveraged 15 years of experience in their profession and averaged seven yearswith their current employer (Table 1). The survey instrument contained avariety of questions relating to job satisfaction, job security, careerdirection, challenges in the work environment, and the economy's impacton careers and the clinical research industry in general.

According to the CenterWatch research analyst conducting thepast two surveys, the 2012 results were largely very similar to the 2010survey—the sample composition was generally the same as the lastsurvey in terms of industry/type of business/years experience and tenure atcurrent company. The following differences will be highlighted in thisarticle:

Overall, salaries have increased from 2010 to 2011. Theproportion of respondents who received supplemental income this past year isthe same as in the past survey.

Table 2 and Table 3 show the positions for which we surveyed,along with the increases between the two years. Also, we surveyed changes byindustry sector, illustrated in Figure 3. All in all, there were increasesto median salaries even with the negative economic news. For US regions, thelargest gainer was the Northwest, followed by the Midwest, Northeast,Southwest and the Southeast, where median salaries remained static.

With the losses and downsizings reported for the last threeyears, we asked respondents how secure they felt about their currentposition. Respondents in this year's survey were more optimistic aboutjob security compared to two years ago. A significantly higher proportion ofrespondents perceived their job security to have improved compared to twoyears ago (Figure 3). Once again, as with the overall economic view, whenlooking at the results by industry, respondents working for CROs weresignificantly more likely to respond that they were very secure in theircurrent jobs.

For this response the changes between 2010 to 2012 werenon-existent. But, when asked about job security compared to three years agowith clinical research professionals in general, all respondents noted anuptick in the positive side of the spectrum.

By industry, 42% of CRO respondents felt very secure with theircurrent employer, versus 31% of site respondents and 18% of sponsors. Thesenumbers improved greatly when checking the "somewhat secure"rating to 46% for CROs, 55% for sites, and 60% for sponsors.

When asked about the security for clinical researchprofessionals for the past two years, the same industry sectors reportedsignificantly increased to 44% of CRO respondents; 35% for investigativesites; and 46% for sponsors.

There is no mistaking that clinical trials have gone global,with no signs of turning back. While the current distribution of clinicaltrials registered onClinicalTrials.gov features most trials still conducted in the United States, Europe,and Canada, the current value for the outsourcing market in China is peggedat $400 million.

However, there has been noted concern that global trials are notall they are cracked up to be.

In Ken Getz's March 2012 column, he reflected on the rushto global trials as a panacea for faster enrollment numbers. However, theenrollment could be deceiving. As he wrote: "Sponsors and CROs havefocused on enrollment rates but less on setting up and coordinating theinfrastructure in remote regions to support these sites. One of the largestglobal CROs reported that on a recent pivotal trial it took three timeslonger to establish the infrastructure and work with health authorities andregulatory agencies in remote regions. A clinical supply manager recentlytold me that study drug shipping times to remote regions took up to twice aslong."

Other surveys have shown that sponsors do have greaterchallenges in the shipping and logistics of the global clinical trial supplychain. Also, concerns exist regarding regulatory agencies in the UnitedStates and Western Europe acceptance of data from clinical trials inemerging markets.

Regardless of what sponsors are considering about global trialsat the higher levels, so far as our survey goes, the increase in globaltrials did not make the top three short list of challenges facing clinicaltrials professionals today. Nor has the increase in this specific challengeshown a change from the last survey, a mere 4% increase.

However, when asked specifically if the professionals werefacing increasing, decreasing, or the same amount of challenges from globaltrials, the majority (46%) said it was increasing. Only 2% noted a decrease.The most significant challenges associated with the increase in globaltrials included the increased workload; changing regulatory requirements ormanaging various regulatory requirements; achieving global consistency; andtechnology challenges.

As mentioned, the economy has more than the actual financialeffect on the industry. The economic performance of a company leads to itschanging business strategies and operational practices to get more value andefficiency.

As mentioned, the respondents from CROs more highly reported apositive change in the economy (Figure 4, Figure 5, and Figure 6). It couldbe from all the other factors listed above...an increase in outsourcing; anincrease in workload; a decrease in pharma staffing sizes. While wecan't pinpoint the reason from this survey, we hope that the positivefeelings spill over to the other market sectors and well into the next twoyears, when we conduct the next survey.

Check out Editor-in-Chief Lisa Henderson discussing the results of this Salary Survey: here 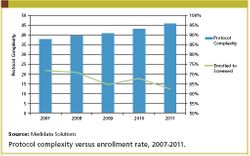 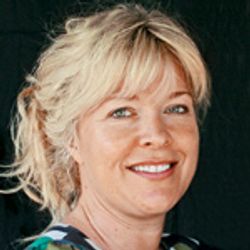