PPD has begun training its Clinical Research Associates in a virtual classroom.

Clinical Research Associates (CRAs) at PPD receive standardized training so they can monitor trials the PPD way. Prior to June 2011, this geographically dispersed group of professionals would travel to the nearest PPD regional hub to undergo a 10-day course. In early 2010, Mike Wilkinson, Executive Vice President and Chief Information Officer of PPD, began looking for ways outside of traditional classroom training that would still produce the highest quality CRAs, but would also be more engaging to the CRAs, and maybe save travel costs in the end.

Mike Wilkinson is Executive Vice President and CIO at PPD.

What Wilkinson found was a 3D virtual collaboration environment from ProtonMedia called ProtoSphere, which allows individuals to engage and learn in highly social, interactive, and visually appealing three-dimensional virtual spaces. ProtonMedia promoted its technology across industries for collaborative meetings and events, but Wilkinson saw promise for virtual training.

"It's very immersive," said Wilkinson of PPD 3D. "The CRAs create an avatar, which is a representation of you in the digital world. The CRA controls the avatar's movement from room to room and certain gestures like raising a hand to ask a question. The CRAs are looking at the screen, but they are immersed in what their avatar is doing."

For example, during one training session, the CRA goes with the trainer to the doctor's office. In the traditional model, the instruction is given using PowerPoint, and then the trainer and a CRA would role play this interaction, with other classmates observing. With PPD 3D, the instruction takes place in the virtual world and each CRA enters a virtual doctor's office, opens the virtual door, walks through and greets the avatar receptionist, sitting at the virtual reception desk. CRAs then engage in virtual source document verification.

Wilkinson explained that the CRAs don't feel as if they are looking at a computer screen but like they are in the actual room. In addition, the program allows more customizations that are globally sensitive and appealing: avatars appear culturally appropriate and are actually greeted in the way of that culture.

"CRAs are required a day before to meet their tour guide in the virtual world for an hour so they understand what the process is and how to work in the environment," said Wilkinson. "We've learned to make that tour guide culturally specific and aligned, and that makes the CRA much more comfortable."

Wilkinson said another benefit of this technology is the cost savings. He said that PPD was able to realize return on the initial software investment within six months by eliminating travel to hubs for face-to-face training. They have completed 11 courses so far and now hold two virtual trainings per month, with plans to do as many as they can virtually. There is also the possibility of doing a hybrid approach—part virtual, part in person. Formal assessments of post-training test scores show that virtual training is every bit as good as traditional training. Based on engagement and feedback, there is a clear preference for the virtual training. Said Wilkinson, "They are having more fun and they are more engaged. They also send us suggestions on ways to improve the virtual training, and we have incorporated many of them."

Instead of traveling to a PPD training site, students of the new program learn in a virtual space.

PPD is now working on initiatives to incorporate the technology for investigator meetings, team meetings, virtual visits to other offices, and more. For Wilkinson, the technology has brought together his former professional role with his present one. For three years, Wilkinson served as PPD's Global Head of Clinical Operations, and prior to that he was the Global Head of Internal Medicine at another company. Eighteen months ago, PPD offered Wilkinson the opportunity to be CIO in an innovative capacity, integrating information technology, global training, business analytics, and process improvement. Wilkinson said, "In operations, I was always looking for a better way to train our CRAs that was both engaging and cost-effective. And we delivered that in PPD 3D." 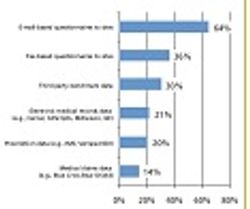 Increasing the Use of Technology in Feasibility