With over 20 years experience in computer compliance, business development, and consulting within the pharmaceutical industry, Colin Goddard has been appointed General Manager at the newly opened Plexys facility in Amsterdam, The Netherlands.

Jeffrey Freitag, MD, Senior Vice President, PharmaNet Consulting, will expand his role to become Chief Medical Officer of PharmaNet Development Group (Princeton, NJ) where he will be the senior medical representative for the company and provide guidance to physicians who are involved in designing and monitoring Phase I through Phase III clinical trials.

Bringing with him over 10 years of recruitment experience, Quanticate People (London, UK) has appointed Richard Ellis as General Manager.

The European Federation of the Pharmaceutical Industries and Associations (Brussels, Belgium) has selected Richard Bergström as its new Director General.

Ockham (Cary, NC) has promoted Michael Enright from Chief Financial Officer to President of its OckhamCROTM division where he will provide senior-level leadership and perspective to pharmaceutical, biotechnology, and medical device clients for the company's Phase I-IV clinical operations globally.

Dmytro Razborov has been appointed Regional Director of Synexus' (Manchester, UK) Ukraine with responsibility for operations and business development.

Robert DiLaura, PhD, Eliot Siegel, MD, and Kiyoteru Takenouchi, PhD, have been appointed Board of Directors for CDISC (Round Rock, TX), each for a three-year term. 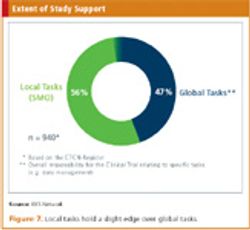