• AAHRPP (Washington, DC) President and CEO of the Association for the Accreditation of Human Research Protection Programs, Marjorie A. Speers, PhD, announced that she intends to retire at the end of this year, or when a successor has been named. Speers has led the organization since its founding in 2001, establishing AAHRPP as a champion for quality research and rigorous human research protections worldwide.

• PRA (Raleigh, NC) announced that it has acquired privately-held ClinStar, LLC, a clinical research organization managing Phase I-IV clinical research trials in the Russian Federation, Ukraine, Belarus, and the Baltic States. Through its operations in the region, ClinStar provides clinical development services to a wide range of pharmaceutical and biotechnology companies.

• InVentiv Health, Inc. (Burlington, MA) announced that it has taken an equity stake in Mytrus, Inc., a company working in virtual clinical trials and technologies such as electronic informed consent to improve trial efficiency.

• ERT (Philadelphia, PA) announced it has been awarded Omega Management Group's NorthFace ScoreBoard (NFSB) Award for consistently delivering outstanding customer service. The award is presented annually to the companies who, as rated solely by their own customers, achieved excellence in customer satisfaction during the prior calendar year.

• Aptuit, LLC (Greenwich, CT) President and Chief Operating Officer, Stuart Needleman, announced that the company has formed the Aptuit Scientific Advisory Board (SAB) comprised of scientific experts from within the company. The SAB will regularly meet to assess Aptuit's current and long-term scientific capabilities and objectives and will recommend actions.

• ERT (Philadelphia, PA) along with pulmonary researchers at the Johns Hopkins University School of Medicine and University of Washington, announced an expansion to the Early Intervention in Cystic Fibrosis Exacerbation Study. An additional 12 investigative sites are now enrolling patients to the randomized study, which was initiated in February 2012. Supported by the National Institutes of Health and the Cystic Fibrosis Foundation, the study will compare standard care to an intervention arm.

• CDISC (Austin, TX) launched the Essential Standards to Enable Learning (ESTEL) initiative of the Learning Health Community (LHC). The CDISC-led ESTEL initiative is the first of several that have grown out of the May 2012 Learning Health System (LHS) Summit, sponsored by the Joseph H. Kanter Family Foundation, which convened a critical mass of key stakeholders representing over 80 organizations across the healthcare spectrum, and achieved multi-stakeholder consensus on a set of 10 LHS Core Values that will underpin a national-scale LHS. The ESTEL initiative of the LHC was launched by CDISC specifically to concentrate on the identification of a minimal set of standards to enable an LHS.

• Pharmaceutical Product Development, LLC (PPD) (Wilmington, NC) announced its bioanalytical operation has been certified by Brazil's Agencia Nacional de Vigilancia Sanitaria, validating that PPD meets the agency's biopharmaceutical safety guidelines and allowing the company to conduct bioanalytical work on its clients' compounds that will be marketed in Brazil.

• IMARC Research (Cleveland, OH), a contract research organization based in Fairview Park, OH, has announced that it is moving its entire operation to a new location at 22560 Lunn Road in Strongsville, OH. IMARC's new space in Strongsville is 23,000-square feet—which is more than a 300% increase over the company's existing space on Mastick Road in Fairview Park, OH. Now with 26 employees, IMARC has experienced double-digit growth over the past two years. This continued growth is expected to create the need for additional staff over the next 12 to 18 months. 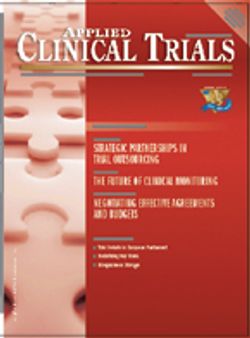