Despite the rush for an effective COVID-19 therapy, biotech industry leaders insist rigorous research and complete data will be the standard preceding approvals.

In the wake of developments that have undermined public confidence in independent and science-based decision-making by FDA, industry leaders insist they will maintain high standards for clinical trials and regulatory submissions for new vaccines and therapeutics to combat COVID-19. Biopharma companies have invested enormous resources in developing new pandemic therapies, but realize that Americans will reject new vaccines and treatments without strong confidence in the safety and efficacy of these products.

Last week, eight prominent biotech industry executives publicly emphasized the importance of rigorous clinical research and complete study data to support any authorization or approval of a new COVID vaccine or treatment. Issued by the Biotechnology Innovation Organization (BIO), the letter also calls on FDA to maintain its “historic independence as the gold-standard international regulatory body” to assure the public that its decisions reflect the “highest standards of scientific and medical integrity” (see: https://bit.ly/3hqFh4l). Biotech leaders also urged politicians on both sides of the aisle to ensure that politics does not influence the development and approval of new medicines.

At the same time, five pharma CEOs stated they would not seek early authorization or approval of a new COVID treatment without a clear demonstration of product safety and efficacy from randomized clinical trials. During a virtual press conference organized by the Geneva-based International Federation of Pharmaceutical Manufacturers and Associations (IFPMA) (see: https://bit.ly/2ZHkuDB), Pfizer Chairman Albert Bouria stated that his company “will not cut corners” or take any action that would tarnish Pfizer’s scientific reputation. Eli Lilly will publish all data and “subject it to scientific scrutiny,” stated Chairman David Ricks, also IFPMA president. Merck Chairman Kenneth Frazier and others urged reliance on FDA advisory committees to gain added transparency to approval decisions and to guard against political influence.

Separately, Moncef Slaoui, the top vaccine scientist on the administration’s Operation Warp Speed initiative, publicly acknowledged that there is “very, very low” chance of successful vaccine results by October, and that he would resign “immediately” if there is outside interference in the vaccine vetting process.

These statements aim to offset fears that FDA might soften its approval standards due to pressure from the White House to make available a COVID vaccine in October. FDA Commissioner Stephen Hahn recently said in an interview that a COVID-19 vaccine could be authorized for emergency use in some populations before the completion of Phase III studies. That followed questionable statements by Hahn supporting the Trump administration’s characterization of convalescent plasma as a major advance in treating COVID patients. Continuing predictions from the White House about a vaccine being available in two months, and instructions from the Centers for Disease Control and Prevention (CDC) that state public health departments should be prepared to distribute a vaccine by the end of October, heightened concerns that political pressure will lead to some kind of authorization of a new vaccine before the Nov. 3 election.

Hahn later tried to show his independence by posting an apology for exaggerating efficacy claims for convalescent plasma. The Trump administration responded by dismissing health policy communications advisor Wayne Pines, evidently for encouraging Hahn’s plasma retraction. Hahn then removed top FDA press and external affairs staffers, who had been placed at the agency by administration officials and were seen as responsible for shaping Hahn’s enthusiasm for convalescent plasma.

The bottom line for FDA and for industry is to protect the integrity of the drug approval process from outside political agendas as vaccine data moves through the pipeline. Manufacturers recognize that premature approval of any products would erode FDA’s coveted gold-standard reputation, an imprimatur that is critical to market acceptance of complex and costly therapies around the world. Biopharma companies have much to gain from producing and distributing effective treatments able to slow or halt the lethal COVID pandemic, but even more to lose in reputation as well as financial health from providing patients with sub-potent or risky products. 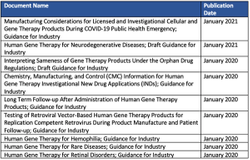