• GlaxoSmithKline and Genmab announced last summer preliminary top-line results from a Phase III study of ofatumumab administered intravenously for the treatment of rheumatoid arthritis in patients who had an inadequate response to methotrexate. The study met the primary endpoint, ACR20 at 24 weeks, which indicates a 20% or greater improvement in the number of swollen and tender joints, as well as improvements in other disease-activity measures. The non-IND study included 260 subjects recruited from Europe, South America, and Australia. Ofatumumab is being developed for other indications under a co-development and commercialization agreement between Genmab and GSK. It is not yet approved in any country.

• On January 8, the FDA approved Genentech's ACTEMRA (tocilizumab) for the treatment of adults with moderately to severe active rheumatoid arthritis who have had an inadequate response to one or more tumor necrosis factor antagonist therapies. The EU also approved the drug in January. ACTEMRA is the first interleukin-6 receptor-inhibiting monoclonal antibody approved to treat RA, and may be used alone or in combination with methotrexate or other disease modifying anti-rheumatic drugs. ACTEMRA was studied in five multinational Phase III studies, of more than 4000 patients, making it the largest clinical development program for an indication in RA to date. It was approved with a REMS that includes a medication guide, communication plan, and timetable for submission of assessments.

• AstraZeneca and Rigel Pharmaceuticals announced an exclusive license agreement for the global development and marketing of fostamatinib disodium (R788), Rigel's late-stage investigational product for rheumatoid arthritis and additional indications. Fostamatinib disodium, which completed its Phase II program, is the furthest developed oral Spleen Tyrosine Kinase (Syk) inhibitor being evaluated for RA. Initial payment to Rigel is $100 million, with scheduled milestone payments. AZ will design a global Phase III program for launch the second half of 2010, and hopes to file an NDA to the FDA and EMA in 2013.

The two major challenges Dr. Schatzman observes in this space are competition and safety profiles required by the FDA. For Alder, a small company, these challenges are almost prohibitive. He said, "For rheumatoid arthritis, at least in the United States, a safety database of at least 2,500 patient years of treatment is required. That translates into some pretty expensive Phase III trials. That is also a barrier. This is becoming the realm of only a handful of big pharmas that can afford that kind of trial. If you figure $100,000 or more per patient, that is $250 million for a set of Phase III trials and that does not include the drug supply." 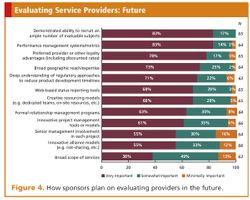 The State of Clinical Outsourcing